WILL THE REAL PRESIDENT OF THE NAACP PLEASE STAND UP!

According to the City Beat Blog, it appears The Cincinnati Branch of The NAACP has received a ruling from the national NAACP office instructing said office to conduct an entirely new vote on the presidency of this our local branch.
As you probably know by now the first election took place back in November 2006.

Incumbent president Edith Thrower and her challenger Christopher Smitherman will get another chance to see who will prevail and take the helm.

There's a regularly scheduled meeting on February 22, 2007., at The Thomas A. Moore Building on Montgomery Road in Evanston. The time (I believe correct me if I'm mistaken) is at 7:00 PM.

Will new procedures needed to ensure a fair election be discussed? Will more chaos and disorder ensue? Will more old men allegedly be beaten up and cursed out? Will another preacher allegedly threaten to shoot folks? Will the incumbent president allow all voices to be heard at this meeting as it was stated by several folks I spoke with, was not allowed at last months meeting? Will Ms. Thrower's challenger for the presidency speak at the meeting on his own behalf or have his flunkies do it for him?

This and more friends, as our story of "WILL THE REAL PRESIDENT OF THE NAACP PLEASE STAND UP"! Continues..... 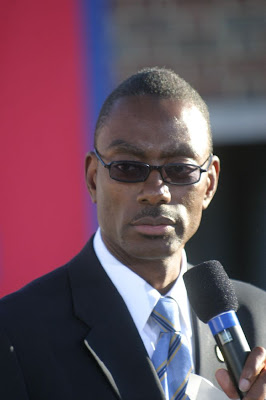 The Mayor of Cincinnati, Mark L. Mallory is holding the annual State of The City address tonight at 7:oo PM.

We are disturbed that one can only hear this publicly elected officials
speech "BY RESERVATION ONLY". What the hell does that really mean? By "WHITE ONLY"? We do not think it fair that the entire public -free of charge- can not hear the mayor's summation on the state of this city called Sinsinnati, seeing as though Mark Mallory was NOT voted on and elected "BY RESERVATION ONLY", he was PUBLICLY ELECTED.

So the PUBLIC, the ENTIRE PUBLIC has a right to see and hear their elected government official, the leader of this city, as he addresses the concerns and issues that affect us all.