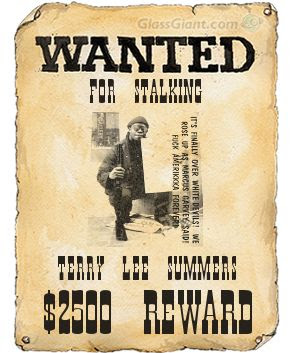 STALKING IS A CRIME!!!

MENACING BY STALKING IS A CRIME!!!

CYBERSTALKING IS A CRIME!!!

TELECOMMUNICATION HARASSMENT IS A CRIME!!!


If you see the midget posted above slithering around the City of Cincinnati -or- Surrounding areas.

Do NOT approach. This midget is only 5' 2 but he is ARMED and DANGEROUS!!!

We say "resided" for he may have been sit out into the cold hard streets of Walnut Hills by now for non-payment of rent.

1. This midget is approximately 5' 2 inches tall.

3. Hair: Black extremely nappy cut like some type of patchwork

6. Always walking -OR- Riding the Metro bus to whatever his location.

7. Facial Description: Always has an extremely goofy slightly retarded smile on his face regardless of the situation (good or bad).

Terry Lee Summers is known to frequent the Cincinnati Public Library Branches in the neighborhoods of:

2. The Main Branch of The Cincinnati Public Library in Downtown, Cincinnati

1. The Kroger's Grocery Store in the neighborhood of Walnut Hills.

2. The Walnuts Hills Check Cashing Place on Peebles Corner in the neighborhood of Walnut Hills.

You will remain anonymous and you could get a cash reward!!!

Note: The amount in the poster is for entertainment purposes ONLY!

(Entertainment - meaning the $2500 amount came with the poster)

Though there is NOTHING ENTERTAINING about the MANY Crimes of Terry Lee Summers.

Through crime stoppers you could get $1,000 upon the Conviction of Terry Lee Summers!!!

TO THE BLACK COMMUNITY/PUBLIC: THANK YOU IN ADVANCE FOR HELPING TO GET THIS SEXUAL DEVIANT THIS CREEPY CRIMINAL TERRY LEE SUMMERS A.K.A. THE DELEGATE OFF THE STREETS OF CINCINNATI, OHIO!!!

AND A SPECIAL THANK YOU TO 1230 AM WDBZ "THE BUZZ" OF CINCINNATI RADIO STATION, LINCOLN WARE HOST OF "THE LINCOLN WARE SHOW", AND CRIME STOPPERS OFC. WARD FOR HIGHLIGHTING THE HEINOUS CRIMES OF TERRY LEE SUMMERS A.K.A. THE DELEGATE OVER THE PUBLIC AIRWAVES!!!

AND A SPECIAL SPECIAL THANK YOU TO YOU, MY FAITHFUL READERS WHO ARE CONSTANTLY CONCERNED ABOUT MY SAFETY AND WELL-BEING AND WHO NEVER WAIVER IN YOUR SUPPORT OF THE BLACK FIST ORGANIZATION AS A WHOLE. PAST -AND- PRESENT...

AND TO THOSE OF YOU WHO ALWAYS SHOW YOUR LOVE AND CONCERN FOR GENERAL NIKKI X THE WOMAN...